On this website you can find information about the research project called Virtual Reality and Phobias, started in 1999. It’s a project in which different universities and disciplines collaborate. Delft University of Technology, Interactive Intelligence group of faculty Electrical Engineering, Mathematics and Computer Science, is working together with the University of Amsterdam, section Clinical Psychology. The major topics of this research project are discussed below. Delft University of Technology is responsible for the topics on Human Computer Interaction and the technical aspects of VR. The University of Amsterdam is concerned with exposure therapy and the psychological aspects of virtual reality. Under News you find recent results. Under Publications you find a lot of articles, reports and video's produced by the project, including its partners. 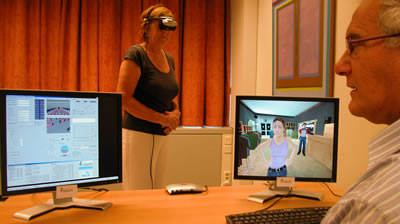 Phobias are the most common form of anxiety disorders, which themselves are the most common psychiatric disorders. In 1998 a study was done in the Netherlands on the prevalence of psychiatric disorders in the general population (Bijl, Ravelli & van Zessen). This study shows that the lifetime-prevalences of agoraphobia, social phobia and specific phobias are respectively 3.4, 7.8 and 10.4 %. This means that 3.4 % of the general population is or has been suffering from agoraphobia during his life. 7.8 % and 10.4 % of the population is or has been suffering from respectively a social phobia or a specific phobia during his life.

Phobias can often be treated effectively by using gradual exposure therapy. During gradual exposure therapy patients are subjected to anxiety-provoking stimuli in a gradual order, from the least difficult stimulus to the most difficult one. While patients are subjected to those anxious situations, they can’t avoid the stimuli and they are staying in that situation to allow the anxiety to attenuate. Traditionally those stimuli are looked for in actual physical situations (in vivo) or by having the patient imagine the stimulus (in vitro).

Virtual Reality (VR) allows a third option of exposure therapy in a virtual setting that is safer, less embarrassing, and less costly than reproducing the real world situations. Besides situations can be created that are difficult to find in real life and it’s more realistic than imagining the danger. Already some experiments have proven VR to be a useful tool in treating specific phobias such as fear of heights, fear of spiders, fear of flying and claustrophobia, as well as agoraphobia. However most research that is done on VR exposure consists of single case studies and controlled group studies are necessary to support the conclusions of case studies. Research in this area is still in its infancy, but is progressing rapidly.

To take Virtual Reality (graded) Exposure Therapy (VRET) from the experimental lab and into the daily practice of psychologists more research is needed. Delft University of Technology and the University of Amsterdam have taken up this challenge. Within four years we have built a fully functional system optimal for the given situation. Furthermore we have substantial data to support the effectiveness of VRET for the treatment of phobias (fear of heights, claustrophobia, fear of flying). The domain is being approached from these two angles:

Both angles are being represented by a group in the project team.

In 1999 we completed a pilot study with low budget VR equipment. The aim of this study was to evaluate the effectiveness of low-budget virtual reality exposure versus exposure in vivo in a within group design in ten individuals suffering from acrophobia (phobia of heights) (Emmelkamp, Bruynzeel, Drost & van der Mast).

Furthermore we completed another study in which we evaluated the effectiveness of low-budget virtual reality exposure versus exposure in vivo. According to this study there were no differences between the effectiveness of gradual exposure in vivo and VRET. Both conditions improved significantly and didn’t differ in their degree of improvement. The decline in fear of heights was sustained at six months follow-up. It seems that VRET has the same effectiveness as exposure in vivo, even when measured on a behavioral avoidance test. We got very interesting results on usability of the therapist user interface, on navigation techniques in virtual reality, on comparison of virtual reality modalities (HMD versus CAVE), and more. We are collaborating with many international partners, especially with the Universidad Politecnica de Valencia.

Our system is being used for fear of heights and claustrophobia in the PsyQ clinics of in the Hague since spring 2005.

Our system is being used for fear of heights and fear of flying in the clinics of VALK foundation in Leiden since summer 2006.

We are investigating the use of VR for the treatment of agoraphobia and fear of flying. We are also redesign our system with modules for agent-support of the therapist and for tele-care. We are collaborating with clinicians from PsyQ in the Hague, and from VALK in Leiden. Internationally we are collaborating with UPV in Valencia (Technical University of Valencia, Spain). In 2008 we started research on VRET for social phobia and post traumatic stress disorder (PTSD). In the area of PTSD, we have developed the Multi-Modal Memory Restructuring (3MR) application, which can be downloaded for free. Since 2010 we are adding many issues about social phobia (and social interacting with avatars in general) on our research agenda. In 2011 work has also started to use VR to study psychotic symptoms in patients. This work is done in collaboration with Parnassia and CleVR.

Wattch the video at: https://youtu.be/iXb7pf8tbuI